Funded under: H2020-EU.1.3.2. – Nurturing excellence by means of cross-border and cross-sector mobility

Nanodrive is a Marie Curie Individual Fellowship  awarded project in the  Horizon2020 scheme.

Creating novel building blocks, which allow for an easy and large-scale fabrication of complex materials, is a challenge and a central goal of diverse scientific fields, ranging from Physics to Materials Science.
In recent publications, I introduced di-block copolymer stars (or telechelic star polymers – TSPs) as novel self-assembling building blocks (“soft legos”), made of a soft core, decorated by a tunable number of functionalized regions or patches.

TSPs have a robust and flexible architecture and they possess the ability to self-assemble at different levels. At the single-molecule level, they first order as soft patchy colloids which serve then as “soft Lego” for the emergence of larger structures. At the supramolecular level of self-assembly, the soft colloids form complex crystal structures, such as for example diamond or cubic phases.

In this project I propose to investigate how such a novel class of highly versatile tunable building blocks can be applied to the self-assembly of novel and designable soft-materials and how to exploit their self- assembly properties for a controlled adsorption and release of nanomaterial into functionalised predetermined regions.

In contrast to many functionalised building blocks, telechelic star polymers particles are soft and they self-assemble into patchy structures, without the need for cumbersome synthesis techniques. The quantitative multiscale approach that will be used to carry out the theoretical part of this project, will allow a direct mapping to an experimental realization of the system.

The objective of this proposal is to investigate how to induce and control a tunable adsorption of nanomaterial within the intramolecular TSP’s self-assembling process, and to use such particles to perform controllable delivery of nanomaterial into target functionalised regions.

The project Nanodrive was highlited on the Horizon Magazine in the article ‘Microscopic Lego’ to keep scientists busy ‘for next 50 years’  and on the November edition of Platinum, Il Sole 24 Ore with the article ‘Nanoparticles against pollutants‘ 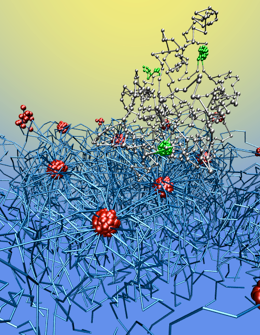